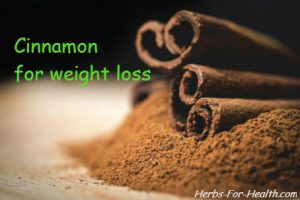 In this article you will learn just how and why Cinnamon helps you lose weight.

It seems that even at the best of times, weight loss can be a confusing topic.

When doing the research, it’s tricky to decipher what is truth and what is fiction.

Hence in most cases, you’ll likely end up being pulled in two entirely different directions.

But while everyone seems to have a different approach to shedding the pounds, there are actually some universal concepts that everyone agrees will help contribute to weight loss. One of the most powerful, but still undervalued, is the use of cinnamon for weight loss.

Cinnamon is not only a great addition to existing weight loss efforts, but it’s also completely natural. Its unique properties facilitate blood sugar and insulin control, a speedy metabolism and appetite suppression, among others—all important processes that ultimately help you to lose weight and keep it off.

But that’s not all it does. The following list details many of the amazing weight loss benefits that cinnamon possesses and by incorporating it into your own weight loss plan, you’ll likely notice POWERFUL effects, too.

The role of insulin in the body cannot be overstated. Insulin is responsible for aiding in the bodies’ regulation of blood sugar, or glucose, and helps to stabilize it and prevent it from spiking too high or dropping too low. When insulin spikes, it creates an increase in blood sugar levels which essentially causes the body to store fat much more easily.

Role of insulin in the body cannot be overstated.

One of cinnamon’s most impressive properties, however, is its ability to control insulin levels by imitating its activity in the body. Adding cinnamon to your diet allows the body to regulate and control insulin levels more effectively, which in turn prevents the accumulation of excess fat, helping you to keep off the pounds for good.

Like stated above, it’s known that increases in blood glucose levels can cause excess fat to be stored in the body. Because of this, people with high blood sugar levels will find it much more difficult to lose weight. But cinnamon’s ability to decrease blood sugar is not just limited to controlling spikes in insulin, but can, in fact, influence blood sugar in a more direct way.

Cinnamon’s ability to lower the glycemic index of a meal directly, for example, helps to lower blood sugar levels and prevent an otherwise unsavoury diet choice from having a significant impact on intended weight loss.

By consuming cinnamon with your meal, you can essentially offset the effects of a meal higher on the glycemic index and help keep blood sugar levels regulated, preventing the body from storing excess fat.

3. Helps To Speed Up Metabolism 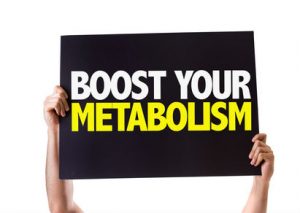 One of the most common complaints from people who can’t seem to lose weight is that they have a slow metabolism. Metabolism will naturally vary from person to person, but there are still many ways to increase your metabolism and create a body that is more effective at burning fat.

Regular exercise, eating a well balanced, low-calorie diet and consuming an adequate amount of protein all help to speed up your metabolism, but by consuming cinnamon and adding it to your regiment, you can accomplish this much quicker.

Unlike other spices, cinnamon takes more energy for your body to metabolize and this essentially speeds up the process. It allows you to burn more calories and better utilize carbohydrate storage ensuring that it doesn’t turn into unwanted fat.

Most of us have heard that it’s important to have low cholesterol—doctors check these levels when performing a regular checkup or physical, but many of us don’t know exactly what it means, only that it should be low. When getting your cholesterol checked, doctors are typically looking at two kinds in the blood: LDL and HDL. LDL makes up the majority of cholesterol in the blood and is largely considered to be the “bad” cholesterol.

High levels of LDL can cause build up of plaque in the arteries and increase risk of stroke or heart attacks. Typically, lower LDL levels indicate weight loss and they also suggests better overall health. In one study, LDL cholesterol was shown to lower after taking the provided dose of cinnamon over the course of the study.

By incorporating it into your diet, you can also help to lower your bad cholesterol and not only lose weight, but ensure a stronger and healthier heart along the way.

One of the most difficult hurdles when trying to lose weight is overcoming the constant hunger pangs when you feel you haven’t eaten enough. Eating complex carbohydrates, like oatmeal or other complete grains, over simple carbohydrates, like bread and sugary foods, can help curb your appetite by taking longer to break down and digest. But that’s not the only way to suppress appetite.

Cinnamon can also slow down the digestion process and stop you from feeling hungry too soon after you’ve eaten.

Cinnamon’s natural sweetness can also curb hunger by satisfying your sweet tooth without actually eating sweet foods. On typical weight loss diet, sugary and sweet foods are off limits, but cinnamon can fill this void without all the extra calories and sugar, allowing you to feel less tempted by these treats come dessert time. Simply adding cinnamon to a meal in place of sugar can help keep your calories down without sacrificing taste.

Proper digestion is often overlooked when approaching weight loss, but it’s impact is quite significant. We tend to think of the foods that we’re eating before we think of how we eat them or how we digest them, but it’s definitely worth it to consider the whole picture.

Digestion actually begins in your mouth, believe it or not. The act of chewing is the first step in digestion as it triggers our salivary glands. Our saliva, which contains important enzymes, helps breakdown the food long before it reaches our stomach acid, but it’s this acid that does the bulk of the work. 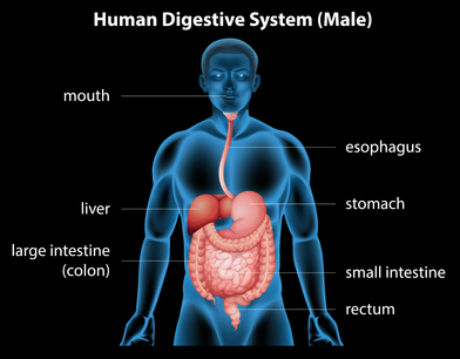 When people have low stomach acid, digestion is more difficult. Not only is it more taxing on the body to have to work over-time, but incomplete digestion prevents the body from assimilating all of your food’s necessary essential nutrients, vitamins and minerals that are so important in weight loss and overall health.

Cinnamon, however, has been shown to help digest food more easily and efficiently and can help in your quest for weight loss. By helping to properly extract more nutrients from your food, you won’t require as much of it in order to meet your daily requirements. You’ll be able to eat the desired amount without worrying that you’re sacrificing proper nutrition just to lose weight.

Don’t let cinnamon’s delicious taste fool you, it’s one powerful spice. Cinnamon is revered for its anti-bacterial properties and when consumed, it can help get rid of unwanted and unhealthy bacteria in your gut. A growing concern in the alternative health community is Candida and its systemic impact on the body and its impact on overall health.

It may start in the gut, but it affects nearly every process in the body and that includes weight loss. Cinnamon can help eliminate this bad bacterial overgrowth and get it back under control. Once the bacteria is destroyed, you can then begin to reintroduce healthy bacteria and flora into your gut by eating a healthy diet and consuming non-dairy probiotic and fermented foods, such as kefir, sauerkraut, and kombucha.

Once Candida is under control and your gut is strong, a healthy weight is much more attainable.

It seems cinnamon’s insulin-stabilizing properties aren’t just limited to controlling blood sugar. One of the ways that cinnamon prevents sharp increases in blood sugar, which we know are bad for weight loss, is by slowing the emptying of your stomach. This obviously helps in improving insulin sensitivity, but it also has the added benefit of helping you to feel fuller for longer.

In the same way that cinnamon can help suppress your appetite, it can prevent you from feeling hungry too often and ultimately eating more than you should.

As we know, portion control is important to losing weight and feeling fuller longer helps to more properly maintain a diet plan, rather than eating whenever you feel like, often times when you’re not actually hungry—when you’re full, you’re not controlled by your constant desire to eat.

As if cinnamon didn’t already do enough, research shows that it also has the ability to increase energy levels, improve alertness and concentration and even improve your mood. While this doesn’t directly affect your weight, its effects on your mental and emotional health may influence your weight loss in other ways.

If you’re feeling motivated and energized, there’s a good chance you’re more likely to stick to your diet and exercise plan.

Too often, we feel discouraged and defeated when beginning our weight loss journey and ultimately ditch the diet and exercise in favour of more instant gratification and indulgences. With the right focus, however, you’re more likely to see it through.

How To Use It 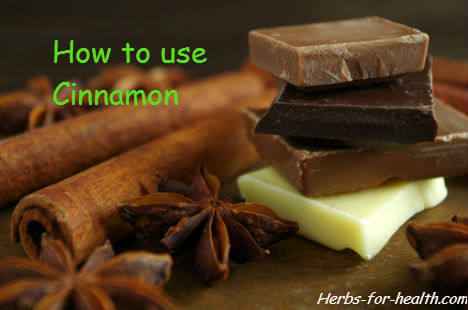 It’s easy to see that adding in this one spice to your diet can play a huge role in weight loss and better health. When trying for better health, every little bit helps and cinnamon can quite literally tip the scales in your favour.

Adding cinnamon into your diet isn’t hard, either—even half a teaspoon a day is enough to begin to see a noticeable difference. There are many ways to incorporate it, too, from adding it to your existing meals at breakfast, lunch or dinner, to creating new concoctions, like a homemade cinnamon tea or adding it to a new smoothie recipe.

Simply sprinkling it on many dishes not only helps you add it into your diet, but in many cases, it can actually improve the taste of your food.

It’s especially useful in meals or foods where you would usually reach for the sugar. For example, instead of adding a teaspoon or more of sugar to sweeten your coffee or herbal tea, try substituting a half or full teaspoon of cinnamon, which is already offered at most cafes. Not only will it add a distinct and pleasurable flavour, you’ll forgo the calories and other undesirable effects that accompany a diet high in sugar. It’s often these small concessions that make the biggest difference when all is said and done.

If you find it difficult to add it to your meals, cinnamon supplements are also available to buy.

Though getting your nutrition from a whole-food source helps the body to better receive the more complete benefits, supplements have their place, too. Cinnamon capsules offer the amazing benefits previously mentioned, but in a more convenient form, perfect for when you don’t have access to powdered cinnamon or when you’re travelling and on the go.

Cinnamon won’t work alone, though. If you’ve found that your diet isn’t working for you, it’s not enough to simply add in cinnamon and except results and to see these amazing benefits. But by coupling it with a healthy diet and moderate exercise, you’ll see the benefits of Cinnamon are numerous.

It’s a simple, cheap and effective way to help you on your path to weight loss and hopefully your ultimate goal of better overall health.

Must Have Natural Medicine Cabinet Essentials