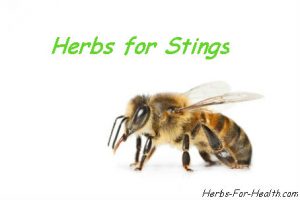 Today you will learn what the best herbs for stings are and how they work. Bees, hornets, wasps and even ants are just some of the common insects that are classified as stingers. If you are an individual who loves to spend most of your time outdoors carrying out various activities, then you are likely to be stung or bitten by such insects. Insect stings although mild in nature are known to cause redness, itching, swelling or even transient local pain that can be unbearable.

These stings can also be fatal, especially in people who are allergic to insect venom which may even result in death if not alleviated on time. Provided below are the most common natural herbal sting remedies that you can easily obtain and use right at your home.

Kindly note that these remedies should only be used by people without allergic reactions to the insect stings and it is important to clean the affected area with cool water and soap to prevent bacterial infection before using the natural herbs for stings.

Plantain is the number one herb for Bee stings. Plantain is a common natural weed that can be easily found around the home. This astringent herb contains special compounds called tannins, which cause the tissues and skin to tighten up thus minimizing swelling as well as reducing pain significantly. Apart from reducing swelling and alleviating pain, this astringent like action can also be highly beneficial as it can be used to stop bleeding, reduce redness, treat cuts, and snake bites, reduce inflammation caused by burns and also eliminate strange harmful elements like embedded objects, poison, and even venom from the skin.

Plantain can alleviating pain, this astringent like action can also be highly beneficial as it can be used to stop bleeding, reduce redness, treat cuts, and snake bites, reduce inflammation

It is highly recommended to use a poultice of fresh plantain leaves to treat insect stings as the natural herbal remedy has the ability to significantly reduce swelling and pain caused by insect stings when applied almost immediately due to its potent anti-inflammatory and antibacterial properties.

Garlic the super-herb which is also among the most common medicinal herbs is a popular culinary spice that can be used to alleviate insect stings as well as other common disorders. The natural sting remedy just like plantain also has very powerful anti-inflammatory and antibacterial properties that can be used to relieve pain, itchiness and swelling. This natural herbal sting remedy can easily be used to alleviate stings through crushing one or two garlic cloves to release the potent garlic juice that can be applied on the affected area.

Lavender, whose botanical name is “Lavendula Officinalis” is a sweet smelling natural herb that beneficial properties for the body, especially for the skin. Its essential oil is commonly used to treat insect stings particularly those caused by wasps or bees. Lavender essential oil has potent compounds that provide it with the ability to neutralize insect sting venom almost immediately after topical application. Apart from its beneficial antihistamine and anti-inflammatory properties, lavender essential oil also contains potent antipruritic properties that help it to alleviate itching.

Parsley is a beneficial natural herb that contains potent antibiotic properties that can be used to reduce pain and swelling, prevent infections and disperse the poisons that are brought about by insect stings. This natural remedy also has various beneficial volatile oils that have numerous compounds, including eugenol that provide it with its effective anti-inflammatory properties.

These are ideal for fighting inflammation, especially that caused by insect stings as well as preventing the infection from spreading. You can easily use this natural herbal sting remedy by crushing parsley leaves with a mortar and pestle and applying the final product on the affected area.

This herb has been traditionally used to treat bruises, cuts, rashes and insect bites or stings for ages now. Its natural extract contains volatile oils like hexenol, eugenol and carvacrol, tannin, flavonoids, catechins, saponins and Gallic acids all of which are beneficial compounds that make it the ideal remedy itching, pain, and inflammation caused by insect stings. This natural herbal remedy can also be used alongside Lavender essential oil for even more effective results.

Witch Hazel has been approved by the “Food and drug Administration” as a reliable remedy for alleviating inflammation and itchiness caused by insect stings or bites. Witch Hazel which can also be referred to by its botanical name “Hamamelis virginianum” is also an excellent astringent herbal remedy with powerful anti-inflammatory, antiseptic and antibacterial properties that can be used to prevent and treat various sting infections.

The natural herb contains potent soothing and healing properties that make it an ideal treatment for insect stings. However, it is important to note that the natural sting remedy may not be able to completely reduce swelling and stinging in severe cases. Marshmallow herb also contains mucilage which is a sticky substance that provides the natural herb with its beneficial soothing and cooling effects that are used to alleviate skin irritation. All these properties make the natural herbal remedy an ideal treatment option for insect bites and stings particularly those caused by bees or wasps.

The natural herbal remedy has potent volatile oils that provide it with its antibacterial properties that it uses to restrict the growth and development of a wide array of harmful bacteria. Its eugenol compound also makes it a natural anti-inflammatory agent. Both anti-inflammatory and anti-bacterial properties of basil make it a powerful natural treatment option for alleviating stings. Most herbal experts recommend the use of the combination of basil and turmeric to treat all types of insect stings.

Thymus vulgaris which is also commonly referred to as “common thyme” is a culinary herb that is popularly used in various flavoring cuisines and dishes. The natural sting remedy which is mostly grown in the Mediterranean has grayish green leaves and pink or white flowers that provide it with its beneficial medicinal properties. Common thyme essential oil has potent volatile oils and compounds that provide the natural herbal remedy with its effective antiseptic and antibacterial properties that are quite beneficial when it comes to treating grazes, minor cuts and insect bites and stings.

Both the flowers and leaves of the natural herb were traditionally used to treat various diseases. The essential oil made from the herbal sting remedy can be used for muscle pain, bug bites, insect stings, inflammation, and bruises. St. John’s Wort essential oil cannot be directly applied on the skin; hence, it is advisable to mix bentonite clay which has the ability to absorb impurities, toxins, chemicals and heavy metals out of the body. This specialized clay also has the ability to neutralize the acidic effects that are brought about by insect stings.

The beneficial natural herbs for stings discussed above may result in some mild side effects, hence, it is important to consult a qualified health practitioner or herbal expert before deciding to use either externally or internally any of the herbal sting remedies provided above.