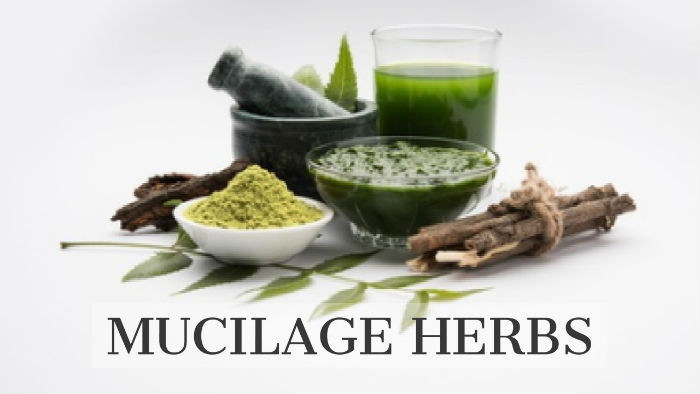 In this article you will discover the full properties of Mucilage and learn why their so valuable for your health. Then you will learn about 15 Mucilaginous herbs and their  health benefits.

But first, What is Mucilage? Mucilage is a soluble fiber that is thick, gluey/sticky, slippery and viscid which is formed from large sugars (polysaccharides).

These polysaccharides swell up in water and have a mild taste. Almost all plants and some microorganisms such as protists(1) produce Mucilage.

Microorganisms use Mucilage for their movements while in plants, it has a great role in the storage of food and water, thickening membranes, and seed germination.

Mucilage is edible although, in the human digestive system, mucilage is not broken down. However, it helps as it absorbs toxins from the stomach and normalises the stool.

Mucilage use in medicine is to relieve irritation of mucous membranes as it forms a protective film. The sticky substance produced by mucilage when in water can moisturize the skin, and soothes inflammation.

Traditionally, cough medicine was made from the extraction of the mucilaginous root of Althaea officinalis (marshmallow plant). Mucilage can be a glue when mixed with water.

There are two kinds of mucilage which are butterwort and sundew (insectivorous plant). They can make yoghurt-like called filmjölk(2).

What are Mucilaginous Herbs?

Many herbs are rich in mucilage, and hence categorized as Mucilaginous herbs. These type of herbs have mending and building properties making them essential in treating:

Most of the mucilaginous plants seems to be succulents such as cacti and aloe, some roots, seaweeds, and seeds.

For any herb classified as a mucilage herb, it must have at least fifteen percent of mucilaginous compounds. As earlier indicated, almost all plants produce mucilage but this percentage is ideal for some of their uses.

Some of these herbs that fall under mucilaginous category include:

A flowering plant hails from mint family. It is native to Guatemala, south, and central Mexico. This herb was an important food crop as a ground or whole chia seeds. However, they are now used in many countries as a source of food and nutritious drinks.

This herb is a moist, tender, and juicy species. Aloe vera extracts are commonly used in medicine and cosmetics industries. The herb is very marketable due to rejuvenating properties like soothing and healing.

Botanical name of sweet cassava is (Manihot Aipi) while bitter cassava is (Manihotutilissima). Cassava is widely grown in South America and West India. Cassava tubers are edible and are used in culinary esculent and when the tuber is grated and washed, starch is obtained which is then converted to tapioca.

Juice from bitter cassava mixed with molasses and left to ferment making an intoxicating liquor that is enjoyed by Indians. It is also found concentrated juice of cassava that has antiseptic properties. Hence, preserving meat which has been boiled in it for a very long time than any culinary process can preserve.

Linseed is another name of flax. This herb is food fiber crop. It’s known as linen in west as it’s used to make textiles. This plant was traditionally used to make bed sheets. It is usually grown in the cool parts of the world.

They are commonly known as oat. Other names given to this herb, Rolled oats and Steelcut oats. It is a species of cereal grain and it’s only grown for its seed. Oats are composed of seed and bran which makes it a grain. Its grains contains minerals like phosphorus and iron which are in high amounts.

They are also rich in carbohydrates. Other properties contained in oats are Vitamins like vitamin B1, proteins, vegetable fiber, fats, and lecithin. The medical value of oats comes from its highly nutritious content.

This herb is grown as drought resistant crop globally. Fenugreek seeds are a common item in Indian dishes. It has a mild bitter taste has a strong flavor but even so, it possesses many medicinal properties.

Rich in vitamin C, iron, potassium, protein, fiber, alkaloids, and niacin. It also contains diosgenin a compound that has estrogen-like properties and steroidal saponins. Fenugreek has antidote properties for hair and skin problems.

Ladies’ fingers as is it known in English-speaking countries is a elongated, slender and green in colour vegetable. This plant belongs to mallow family and is also known as Okra. This herb has many medical benefits like stabilizing blood sugar.

These are part of the seed of Plantago ovata plant. Psylliumis also known as isabgol. This plant leaves resembles those of aloe vera. It is native to Pakistan, Bangladesh, India, and Indian subcontinent. This plant can hold water thus making it a hygroscopic plant. This aspect allows this plant to expand makes it mucilaginous herb.

The herb is very popular in Ayurveda for its diuretic, laxative, and cooling properties. The health benefits of this isabgol husk powder are; curing diarrhea and constipation. Relieving digestive acid, absorbs the cholesterol, cleanses toxins in the colon. Thus helping in weight loss, assisting indigestion problems, and also controls diabetes.

Plantain herb has many other names like Broadleaf Plantain, Plantago Asiatica, White Man’s Footprint, Common Plantain, cooking plantain, Ripple Grass, Snake weed, Waybread, and Greater Plantain. This herb is edible as its young leaves are eaten raw in salads or even cooked in pot herb.

Its extracts have antibacterial activity, these repair damaged tissue. Also stops bleeding, the heated leaves can act as dressing for cuts, skin inflammations, wounds, malignant ulcers, and swelling. The roots are also used as an anti-venom for snakes bites. The herb seed contain thirty percent of mucilage hence plantain is mucilaginous herb.

The herb Marshmallow is from Malvaceae family. It’s a perennial herbaceous plant. Which grows in damp areas, salt marshes, along riverbanks, and by the sea. Marshmallow root is a drought resistant plant. Thus it’s used as food especially during famine when they grow in abundance much more than other veges.

It has many medical uses like treating inflammation and irritation.

Used with other herbs to treat mild respiratory symptoms like cough. Its roots were traditionally used to promote a healthy digestive system. It’s considered as demulcent herb as it is soothing, slippery, and cooling. Mucilage content in this plant helps to treat gastrointestinal disorders.

Botanical name of Licorice root is (Glycyrrhiza glabra) and is a species from the Leguminosae family. This herb has other names like Sweet Wood, Regolizia, Lacrisse, Sweet Licorice, Liquorice, Reglisse, and Suessholz.

Traditionally, the roots of Licorice root were buried in caskets and tombs to help the soul rest peacefully in the after life. It’s used to treat coughs and lung disease.

It can also be described as a bitter, cooling mucilaginous herb that soothes and cures tissues. It has expectorant, diuretic, antiseptic, and analgesic properties.

Kelps is also known as Black Tang ,Sea Weed, and Bladderwrack and botanical name is (FucusVesiculosus). Kelp is a source of vitamin B12 for vegetarians.

Irish mossis also called pearl moss and carrageen. All parts of this herb are used. This plant is a seaweed which is perennial and it grows on the rocky shores of North American, European and the Atlantic coast. It has alterative, expectorant, laxative, Demulcent, emollient, mucilaginous, and nutritive tonic properties.

Basellaalba is a perennial plant that is from Basellaceae family it’s also edible. It grows in Africa and Asia where it grows in abundance and is eaten as vegetables. Actually is widely used as a substitute for spinach. As it’s rich in iron and calcium and is a source of vitamin A, B, and C.

All these Mucilaginous herbs are great when prepared by sopping in water. As an infusion, it’s used to treat a sore throat and other digestive track conditions. In the case of irritated, red, inflamed or hot skin, it’s used for washing or applying topically. In the case of vaginitis or hemorrhoids, as a sitz bath.

The mucilaginous herbs discussed above can effectively cure digestive track conditions and also promote good health. This is also thanks to their high nutrients content. However, you should always make it a habit of consulting a qualified medical practitioner before you use any herb an as alternative treatment.

Medical information provided is for information purposes only. Always get guidance about a medical condition from a health care professional.
Share58
Pin21
Tweet2
81 Shares