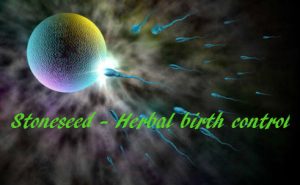 Today we are going to introduce you to a interesting herb called Stoneseed. It was first used by Native American Indians for natural birth control.

Stoneseed or to give its more common name ” Western Stoneseed ” whose scientific name ( Lithospermum ruderale ) is a perennial flowering herb. Which belongs to the borage or Boraginaceae family of plants. It’s well known family members include forget-me-not (Myosotis spp) and comfrey (Symphytum spp) The herb is native to western United States and western Canada(1) .

The Navajo Indian tribes along with the Dakota and shoshone Indians. Were the first to use a herbal infusion of Stoneseed root for birth control. The roots of stoneseed are steeped in cold water for a couple of hours. They then drink a cup of this infusion once a day for six months. This is said to induce sterility permanently.

The native Indian tribes used stoneseed for hundreds of years. However, it wasn’t till 1945 that the wider world learned of this herbs birth control abilities.

The U.S. Department of Agriculture first initiated scientific research on stoneseed. Then in 1945 the first scientific study was carried out and this confirmed the effectiveness of the herb for birth control. Since that first study many more have been carried out on animals and this has confirmed that stoneseed is indeed a contraceptive.

This type of action is pharmacologically unique and is not known to be duplicated by any other compounds.

The laboratory studies found that the main active compounded responsible for the herbs contraceptive abilities is called Lithospermic Acid(2)  or LA. The Lithospermic Acid(LA) acts mainly on the pituitary gland to stop the production of the hormones that control the sex glands. This also stops the production estrogen’s and androgen’s. Thus inhibiting the female reproductive systems.

Further studies suggest that the herb has no permanent or long term effects on the reproductive system. In the research when the test animals were taken off Lithospermum the estrus cycle returned to normal and on examination the pituitary gland was shown to be normal.

Lithospermic Acid is most concentrated in the herbs flowers and seeds. Therefore if making stoneseed root tea the herbs flowers are the best place to start the infusion. In test it has been shown that their’s no difference between fresh and dried herb extract.

Availability, you can buy Western Stoneseed online but you have to look hard, don’t confuse it with Gromwell (Lithospermum officinale). If you live in California you can find the herb growing on dry slopes of Placer to Modoc counties.

This article was written, to try and condense the information available about stoneseed root so that YOU can come to your own decision on this natural birth control option. I’m not a expert on contraception and there’s probably many more safer methods of birth-control. If however you do use this herb it’s highly advised you consult an experienced herbalist. Because YES herbs like medicine can cause unwanted side effects.

What stoneseed shows is that there’s a herb for nearly every medical condition. It’s also interesting to note herbs can be pharmacologically unique. That no known plant or compound has the same ability’s. It wasn’t till 1945 that this herbs benefits were discovered by science. So yes again, Natural Remedies still hold many secrets for science.

Medical information provided is for information purposes only. Always get guidance about a medical condition from a health care professional.
Share10
Pin7
Tweet1
18 Shares