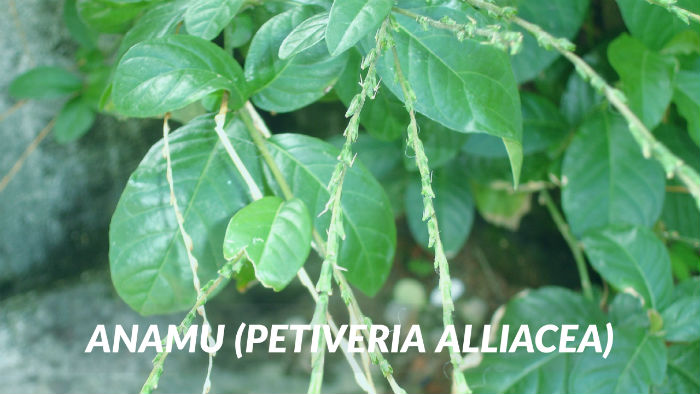 Today I will share with you the health benefits of the herb Anamu (Petiveria alliacea) and it’s many uses. But first what is Anamu?

Anamu is a perennial herb plant from the Phytolaccaceae Genus Petiveria family. This plant grows to a height of up to a meter. It is native to the Amazon rainforest as well as tropical areas of the South and Central America, Caribbean, and Africa.

You can easily identify this herb by its dark green colored leathery leaves that lie close to the soil. This plant also has tall spikes that are lined with small white flowers. The herb has a very long history in herbal medicine in all the areas it grows.

Due to the diverse areas that the plant grows (ie, all over the world), it has very many names both scientific and in local dialects.

Some of the scientific words include:

Other common names include:

Usage in traditional herbal medicines. As mentioned earlier this plant has been used for many years as an herbal medicine in all the areas it grows. In Brazil, this herb was considered as a menstrual promoter, antispasmodic, sweat promoter as well as a stimulant.

Herbalist, as well as natural health practitioners, also used this plant for malaria, arthritis, edema, rheumatism, and poor memory. It was also used as an anti-inflammatory and topical analgesic for skin conditions.

Additionally, women to help them in relieving childbirth pain as well as smoothing the process of delivery used this herb in Central America. In other times, it was also used for abortion.

Moreover, people used to take its leaf decoction internally to help in digestive disorders, fever, and flatulence as well as to speed up the digestion of foods.

The herb is also still being used in some towns of central and South America as a natural remedy to treat various diseases including colds, cough, and influenza, pulmonary as well as respiratory infections.

Anamu has various compounds that are very beneficial for your health. This includes antioxidant tannins that are also found in teas, fruits, and berries. These antioxidants have the ability to reverse the damage that is often caused by the free radicals in the environment.

Similarly, the compounds can heal swelling and redness.

Besides the tannin compounds, this herb also has, a chemical referred as dibenzyl trisulfide. This chemical has undergone various tests in the laboratories and has been seen to exhibit some interesting behavior regarding its anti-cancer potential(1).

Other beneficial compounds that are available in this herb are photochemical’s, which includes coumarone, benzaldehyde, and astilbin. These compounds have a positive influence when dealing with tumors.

For the last couple of year, a lot of scientific attention has been paid to this herb and has shown positive results on when it comes to integrating Anamu in the medical science.

These researchers have shown that the plant has various chemical compounds that are quite beneficial to the human body. This explains why various communities have used it to treat a wide number of health conditions and have also used it for many years.

Now lets us look at the health benefits that you can get from Anamu.

According to research done in South America, Anamu has antiviral properties that are helpful in dealing with a large number of harmful organisms including certain bacteria, fungi, and virus.

According to research that was published in the year 2002, the Anamu extracts were resistant to several fungal and bacteria strains(2). Besides being used to control these organisms in the human body, this herb is also used in South America as a way of controlling ticks in cows.

2.  Anamu May Help with Cancer

Several research bodies have demonstrated that Anamu extract has a high potential for treating cancer. The two phytochemical available in this herb, the astilbin, and dibenzyl trisulphate are believed to have positive results in destroying the cancerous cells while leaving the healthy cells unharmed.

The research also indicates that the Anamu does a great job in boosting your immune system.

It will be more effective in protecting itself against infections and cancer.

We also have research that dates back to the 90s where Italian researchers found that Anamu extract inhibited leukemia cell growth and d other forms of cancer. We also have other follow up studies that indicated that the Anamu extract did not only inhibit the cancer cells but also offers the body with cytotoxic effects that have the ability to kill the cells.

The extract from this herb demonstrated thus ability against various cancerous cells including leukemia, lymphoma, as well as breast cancer cells(4).

There are also some other studies that were published in the early 2000s that found that the extract was also effective against the cancer cells in the brain and liver.

In addition, we had a more recent study conducted in 2008, which showed that the extract was effective in tumors in mice. The researchers concluded that the Anamu extract was a promising antitumor candidate.

The Anamu extract has been used for many years to treat flu, cold and other respiratory diseases. The argument is that the extract helps to boost your immune system making your body strong. Once you have a stronger immune system, your body has increased ability in fighting bacteria, viruses and other microorganisms that cause diseases.

As a traditional remedy for rheumatism and arthritis, a clinical study has also confirmed that Anamu has pain relieving and anti-inflammatory effects.

According to a study conducted in Brazil and published in 2002, Anamu had positive inflammatory effect and analgesic effect when it was given to rats that had pleurisy.

The effect was seen when it was applied on the skin of the rats or given orally.

This research validated its traditional use as an inflammation painkiller although they recommended further studies to clarify precise mechanisms of its actions(5).

Since Anamu, has natural inflammatory effects as well as pain relieving qualities, it is recommended for individuals suffering from rheumatism and arthritis.

Similar to other herbs, the Anamu plant is believed to be a natural emmenagogue. This means that it can stimulate the blood flow to the uterus allowing for menstruation stimulations.

There are a number of reasons why this may be desirable for some people including convenience as well as use as an emergency contraceptive. For this reason, you should avoid using this herb if you are pregnant.

7. Anamu for Rheumatism and Arthritis

As mentioned earlier, Anamu has natural anti-inflammatory properties in addition to its pain relieving quality. For this reason, it seems to be an excellent choice for individuals suffering from rheumatism and arthritis.

Although there is not much research backing the effects of Anamu in treating diabetes in a human, there have been several animal studies that has noted interesting results in treating diabetes. This research shows that Anamu caused a significant reduction in the blood sugar levels.

A study indicated that the blood sugar levels reduced to as much as 60 percent. This suggests the reason Anamu has been used by many generations in Cuba as a diabetic. However other studies suggest the herb show NO hypoglycaemic action(6).

9. Other Potential Benefits of Anamu

Besides the many benefits listed above, Anamu can also be used to enhance digestion, increase urine, and sweat production. Some studies also suggest that it has mild sedative and anti-anxiety properties. Moreover, because of its pungent garlic-like aroma, it can also be used as an insect repellant.

Today you can find Anamu in tablet or capsule form. It is also available as a whole herb where it is dried and crushed. You can use the dried form to make a traditional decoction.

How to prepare Traditional Anamu Tea

The short video below shows you how to make healthy Anamu Tea.

Preparing a traditional Anamu tea is straightforward, you simply need to take about thirty grams of the whole dried herb and pour it in one liter of boiled water. Allow it to seep for 10-15 minutes. Take a quarter or half a cup for 1-3 times a day depending on the seriousness of your condition.

-Although Anamu is considered safe generally, there are some precautions that you need to know before using it.

-Pregnant women, as well as those who are trying to conceive, should not use Anamu. There are studies that show that this herb stimulates uterus contractions which might the main reason why it is used for abortion.

-The herb may also thin the blood, so anyone with preexisting blood conditions such as hemophilia should avoid it

-Animal studies indicate that Anamu has some hypoglycemic effect. For this reason, people with diabetes or hypoglycemia should avoid it.

Last few words. Although Anamu can be taken in the form of tablets and capsules, medical practitioner’s advice taking it in its natural form. Instead of purchasing Anamu in its dried form, you can grow the plant in your home.

By doing this, you will not only get its medicinal value, but it can keep your garden free of insects. This is killing two birds with one stone, don’t you think? Well, there you have it. Now you know all the benefits that comes with this herb and how you can take it to enjoy the benefits. All the best!

Share6
Pin4
Tweet1
11 Shares
Medical information provided is for information purposes only. Always get guidance about a medical condition from a health care professional.