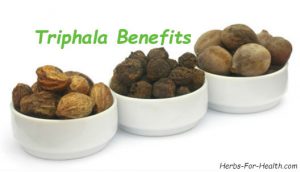 Triphala, which has been used in Ayurvedic medicine for more than 2,000 years now, is a natural herbal remedy that is considered to be the most versatile and greatest of all the readily available herbal formulations in India.

In this article you will learn the full Triphala Benefits for your health.

The traditional herbal remedy is made from three different fruits, hence; the name “Triphala.” Triphala comes from the two Sanskrit words “Tri (three) and “phala (fruits)”.

The dried powders from the three different medicinal plants are mixed equally to make a potent churna (Triphala powder). Each of the three fruits when used individually, have their own medicinal value, thus the natural herbal remedy becomes even more potent when all of them are mixed and combined to make the churna. This informative article is going to educate you on the common scientifically proven effects of Triphala.

The highly beneficial natural herbal remedy can be used as part of an effective weight loss program that combines specific, easy-to-do exercises with a healthy diet plan. Apart from promoting proper digestion and improving waste elimination, the herbal formulation also eliminates irregular food cravings by making you feel a lot fuller for longer than you actually are.

Amalaki, which is one of the fruits used to make the potent herbal remedy, has the ability to break down unwanted, stubborn body fats thus actively helping in the weight loss process.

Various scientific studies have proven Triphala’s ability to help with weight loss, especially in obese people. For instance, a 12-week scientific study involving obese individuals aged between 16 to 60 years revealed a significant decrease in overall body weight and both hip and waist circumference in men and women who used the unique herbal formulation. 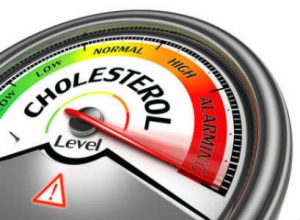 Bibhitaki, which is one of the fruits used to make the effective herbal remedy, has been scientifically proven to inhibit the progression of atherosclerosis plaque. By regulating blood cholesterol levels, Triphala actively works to reduce blood pressure while also protecting the heart specifically from various cardiovascular disorders.

Triphala is an excellent anti-inflammatory agent thanks to its powerful polyphenol and antioxidant content. Although almost all diseases are often attributed to have been caused by a certain degree of inflammation, the beneficial natural herbal formulation can be consumed or applied topically to alleviate arthritis.

Arthritis, which is a painful medical condition characterized by the inflammation of the joints can also be easily alleviated simply by using the herbal remedy. Rheumatoid arthritis sufferers have also been reported to have realized a great improvement in their bone and cartilage breakdown after using Triphala.

The herbal remedy has been scientifically proven to kill harmful tumor cells, hence; making it a very promising potential anticarcinogenic drug. According to a 2014 scientific study(2), the herbal formulation can help to cco-inducedreverse oral precancerous lesions that are toba.

Another study that was carried out in the year 2015 which was mainly focusing on Triphala’s proapoptotic (ability to encourage the programmed death of cancer cells) and antiproliferative (ability to inhibit the growth of cancer cells) effects, particularly on human colon cancer cells revealed that the herbal tincture contains special compounds that can be used to treat and even prevent cancer.

These compounds which include isorhamnetin, naringin, homoorientin and quercetin were found to be able to actively suppress and even induce the death of cancer stems found in the large intestine (colon). The gallic acid compound found in Triphala has also been discovered to prevent the growth of prostate cancer cells.

Triphala is also a potent natural eye tonic that can be used to improve eyesight when used as a natural eye wash. The herbal infusion is guaranteed to keep your eyes healthy and sharp if used on a regular basis. The natural herbal tonic can also be used to correct various common eye disorders facing man today, including cataract, glaucoma, conjunctivitis, progressive myopia, redness, and soreness.

Triphala is a great safe, natural laxative that can be consumed to easily stimulate bowel movements, the intestinal tract and the gastric mucosal lining for even better digestion. This is probably the reason why the potent herbal tonic is regularly prescribed to people suffering from various constipation issues.

Triphala can be used in the management and treatment of diabetes mellitus. This is because the beneficial herbal infusion actively facilitates the pancreas to release even more insulin to meet the body’s demand. A scientific study that was conducted by the “American Botanical Council,” on rat specimens revealed that the natural remedy can greatly reduce blood glucose levels.

According to the study, Triphala contains various essential compounds that actively reduce the inflammatory cytokine release effect in diabetic patients thus resulting in the reduction of insulin resistance.

Discover Scientifically Proven Triphala Benefits for Your HealthClick To Tweet

Triphala is a relatively safe, natural herbal remedy with no known drug interactions. However, it is important to avoid using the potent tonic if you are taking any blood-thinning medication as this may result in reduced platelet function. Nursing mothers, pregnant women, and small children should also stay away from the herbal formulation.

Judging from the multiple effects of Triphala discussed above, the herbal tonic is a must-have natural remedy that you should always keep in your herbal medicine cabinet.

Medical information provided is for information purposes only. Always get guidance about a medical condition from a health care professional.
Share40
Pin9
Tweet1
50 Shares